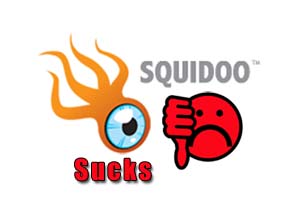 Yep. Squidoo Still Sucks !  Last year, in May 2013 was the start of Squidoo going down the hill. They had freaked out Googles search engine algorithm changes and start making changes which they thought going to improve their site. But it seems things has gotten worse since then.  Maybe Squidoo now having better profits but not their users. They have started locking and delete lenses right and left and I don’t think there’s a single Squidoo user who hasn’t effected.  I have seen so many who just deleted their lenses and account after that. Not spammers but real writers who used to build quality content and spend hours everyday working on their lenses. Squidoo used to had below 100 Alexa rank but now they are over 400. I guess that alone shows how many users they have lost.

I have never been a big earner at Squidoo. Those days I had a Squidoo account with half dozen lenses and these were just sitting there. I was earning few cents every month and an Amazon sale here and there. There were no out going links to other sites and all content in every lens were unique content.  But I found almost all were locked. I tried to edit few lenses but nothing worked. I didn’t want to waste my time there so I just took a backup and removed all sites from there like many other people.

BubbleWS is a great Squidoo Alternative

I have started using BubbleWS. It’s a different type of site but worth time I have spent there. I have received payment on time and I have been paid around $150 – $200 per month. It’s lot easy to make posts and earn money there. All you need to do is good unique content with at least 200 words and you can get paid without a problem.  I even made a post about how to do it properly at BubbleWS. You can read it here >> Link.

Squidoo say they remove lenses because those are low quality or some other problem which can be related to search engines. I did an interesting experiment about this too. I have created a Google Blogger.com blog and added all those posts. Within 3-4 days all those posts ranked same at my Squidoo lens used to be. Good thing is I get to earn 100% from AdSense and Amazon earnings since it’s my own blog.  So whatever they are telling about this quality content and search engine thing is a total BS. I guess every good thing comes to a end too at some time. So this is the time for Squidoo.

I’m telling this because I wanted to test Squidoo again and gave it a go again. Two weeks ago I made another Squidoo account and created one lens with 1500+ words. I added a module everyday with some unique content.  Something I noticed was it’s so hard to get Likes or Social sharing. After 5 days and around 40 Likes and comments in other lenses I received 10 Likes and Comments. Most of these were from Giant Squids who thought it’s a good lens.  So then I received the mail telling the lens is locked because either someone has complained about it or it has not followed their new rules. Lens was about just freshwater fish and I don’t know why someone would complain about it but One complain is enough for them to automatically lock a lens ? Also I’m not a newbie at Squidoo so I know none of their rules are broken.   I made sure of that.

If you are planing to create a Squidoo account for earning money online I suggest just take a breath and think again. It will be a waste of time.  If you think I have some kind of beef with Squidoo you can search Google for Squidoo reviews and search for reveiws made after July 2013. You will see experienced Squidoo writers moving from the site by 100’s just like rats abandoning those ship about to doom. If you have enough time you can always make an account and test your self.  Better try BubbleWS or start a Blogger.com blog. If you are a Squidoo user how had so many locked lenses then for you it will be more profitable and easier to start a self-hosted WordPress blog or Google Blogger blog and post those lenses are articles there. Imagine Modules as posts and make a post everyday until you have 30 posts in your blog. Then you can make a post per week.  It’s easy to signup for Google AdSense using Google Blogger and also you can create a Amazon Affiliate account without a problem too. This way you will be getting 100% profits for your work and also no need to worry about locked lenses anymore.

The best alternative for Squidoo is having a self-hosting WordPress blog. That way nobody will have control over your content. Best best option is Google Blogger account. But be careful when your blog is new because these days they watch out for spammers.  But if you post unique content  then nothing should be a problem. There are other alternatives you can try,

There many more sites like these which can list here but I will write another post about all alternatives with in-depth details. The most important thing is not putting all eggs in same basket. You can’t be 100%  sure about future. Look at what happened to Squidoo.  Few years back there were users who earned over $3000 per month from Squidoo alone. Not anymore. So always you need to have several revenue making methods.